We have been having some great success lately selling vintage magazines through eBay and I thought I'd write a post with some suggestions for other sellers or anyone who might be considering tossing that old stack of magazines that 'grandma' or 'grandpa' collected.

Who knows what the human mind may sentimentally attach itself to and for what reasons but as vintage re-sellers we are so glad that people do collect and hold onto what seem at the time to be everyday items but that as years past, turn to gold.

We started by posting an old 1980's issue of National Enquirer that we had picked up for free on a table of FREE stuff at a flea market and when that sold we started asking friends and family if they had any old magazines they would like to get rid of.
We hit the jackpot with Laura's Mother in Law who had squirrelled away a bunch of old magazines that Laura's husband Michael had delivered to the house when he was still living there.
"I just piled them up in the spaces under the eaves of the house, they made good insulation. No one's touched them in years."
She invited Laura over to have a look and now the Grrl Pickers are the proud owners of over 200 copies of LIFE, TIME and Sports Illustrated.

LIFE, with it's great pictures is one that a lot of collectors held on to so even beautiful commemorative issues are rather commonly seen and don't earn much when sold online but, TIME and Sports Illustrated are tyoes of magazines that people for the most part, read and then tossed away when the next issue arrived the following week.
Looking at the covers only, the issues we have don't seem very exciting but it's when we start opening up the issues that the true rusty gold comes to the surface.
The state of the economy in 1977 is not of great interest today but looking closer at issues of TIME we are reminded that 1977 was the year Star Wars was released and of course a national news magazine has stories covering the excitement of that debut.

Up and coming young senators of 1978 are a pretty yawn inspiring bunch but looking closer at issues of TIME from that year we are reminded that Ralph Bakshi released his (at the time) ground breaking animated adaptation of The Lord of The Rings. Old issues of general interest magazines have advertising and articles about that moment in the history of a very popular collectible franchise.

On a more grim note, many old news magazines also cover true crime of the day. Stories relating to the police hunt and capture of notorious criminals are almost as collectible as advertising and articles from popular movies.

Which brings us to Sports Illustrated. The bulk of the magazines we recently aquired are issues of Sports Illustrated and not being a big sports fan I (Laura) wasn't all that keen on diving into those right away. I also didn't want to accidentally sell any issues that might be sentimental to my husband, as they are actually his magazines that he subscribed to some 30+ years ago...  But having looked through all the TIME and LIFE I brought an interesting looking issue of Sports Illustrated upstairs to look through while I ate breakfast. It had a cover story about illegal gambling and game score fixing that focused on Boston college level sports teams so, at the very least I thought, the local angle could be interesting to me and maybe others. The I saw the byline,
Henry Hill.
Highly collectible mobster turned informant, whose story became a very popular movie, THAT Henry Hill.

From glamourous actresses (we sold a TIME with Diane Lane on the cover for 6 bucks plus shipping to someone in the UK), to movies of note, (a LOTR heavy issue of TIME is also on it's way to the UK), to common and not so common criminals, (another issue of TIME with an article about the not yet caught 'Yorkshire Ripper' recently sold for just over 10 dollars plus shipping), old magazines are chocked full of all kinds of saleable goodness, if only we take the time to look past the boring cover stories.

I'm not so sure the mountains of National Geographic collecting dust in everyone's "Nana's" house are worth much of anything, just being so commonly collected they are probably not but who knows?

We are endlessly surprised by what people will buy and just want to pass on the message to any other sellers, don't let a great pick slip away!
Give those old boxes of magazines another look past the covers, the potential value of what you find just might surprise you.

Mary Pickford article on the occasion of her death: 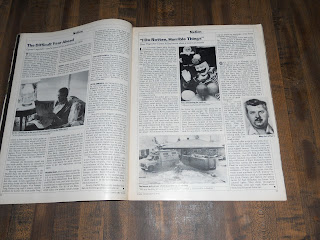 Ad for Alien, the first one: 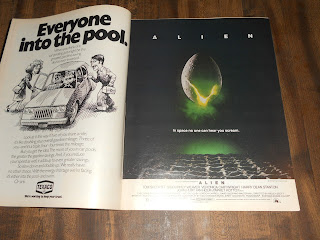 Article about Norman Rockwell on the occasion of his passing: 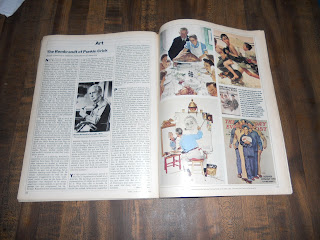 I expected to get maybe a buck or 2 for these at the flea markets and I am finding they are in demand internationally, go figure...


Posted by Grrl Pickers at 4:09 PM No comments:

We have driven by this place a million times on our way to the beach and it never seems to be open when we are in the area but it always looks like it's a thriving business, it never looked like it was out of business, just kind of semi-permanently closed.

As the building is so intriguing, we were determined that as soon as we saw it open we would stop immediately and check it out. We got our chance this past weekend and were not disappointed.

Reflections Antique Emporium is an absolutely magical cornucopia of vintage wonderment. It's the sort of place that you would imagine (or would like to imagine) that everything comes alive at night to dance and frolic with each other as soon as the proprietress locks up for the night. 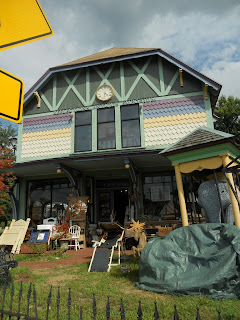 The eclectic arrangements on the shelves both out front and tucked into alcoves of the building are wildly imaginative and encourage browsers to not only take one thing home, but to take many as it's almost painful to consider breaking up such fascinating tableau. 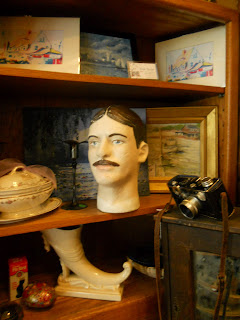 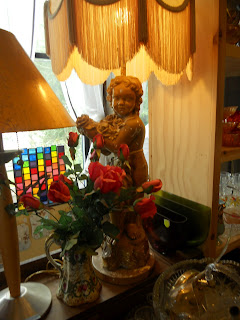 Old, new and crafty combinations of the two meet all over the shop. 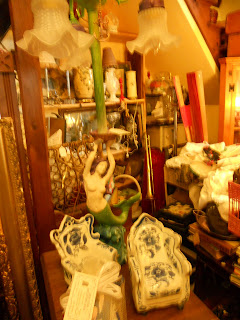 The shop comprises both floors in what was for sure once a single family dwelling, and something for the whole family can be found throughout. Toys, clothes, books, games, jewelry, housewares, ephemera, there is nothing that was ever manufactured for consumer trade that is not somehow, somewhere represented in this magical shop. 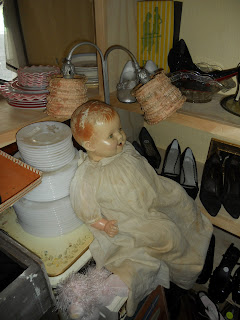 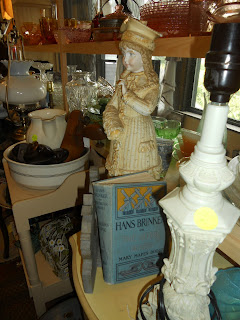 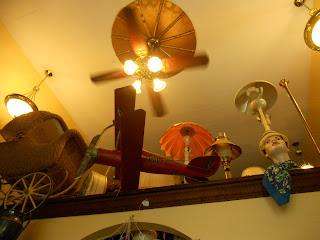 At first glance it seems kind of crazy crowded and I was afraid to wander too far or look to close for fear of not being able to find my way out and/or breaking something expensive but a lot of thinking went into the set up as each small room propels you into the next with the joyous glee of discovery. 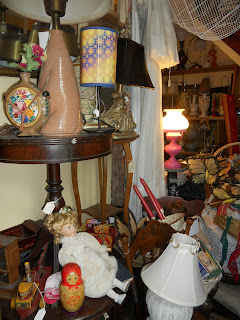 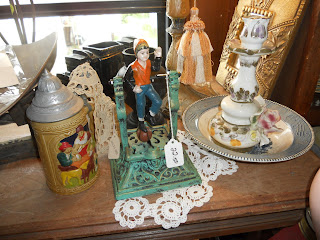 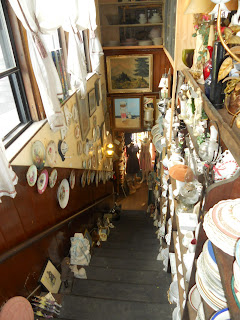 Not just an antiques emporium but a showcase for upcycling artisans as well: 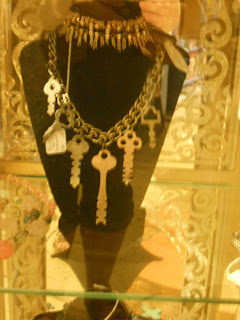 It's hard to miss the elephant in the yard. Elegant whimsy meet brilliant marketing in such a way that you can't tell you've been sucked it til you are already there, on a buzy main road posing next to a disinterested elephant... 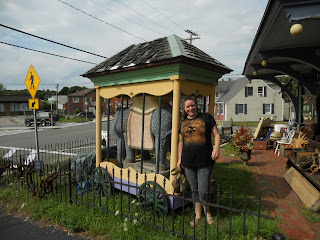 Someday, I hope Grrl Pickers has a bricks and mortar shop even half as lovely as this one. 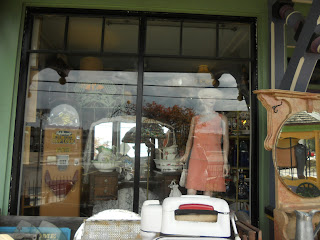 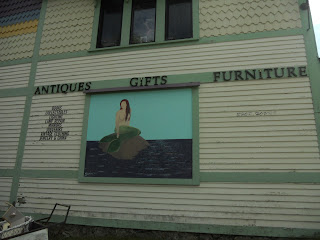 A fun place to browse with an absolutely top notch inventory. Prices are reasonable for the great items if one were looking for a gift or to add to a personal collection but it's not the best picking location as the items contained within are priced at their fair market value.
But it is right next to the beach so even if you head out there and can't make a great score, there's always going to pick some great shells off the beach to make sure you don't go home empty handed. 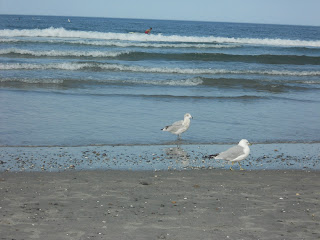 Grrl Pickers highly recommends a visit to Reflections Antique Emporium to anyone who may be in or passing through the Nantasket beach area (located at 808 Jerusalem Rd, Cohasset, MA tel: 781-383-6465, call first if you are headed there from a distance, the hours are a bit erratic and they are frequently closed. Probably out getting more great stuff for the shop!)
Posted by Grrl Pickers at 8:08 AM 1 comment: